Meditation as a way of Getting Ahead!

Meditation and mindfulness are the new rage in Silicon Valley. And it’s not just about inner peace—it’s about getting ahead.

CHADE-MENG TAN IS PERCHED ON A CHAIR, his lanky body folded into a half-lotus position. “Close your eyes,” he says. His voice is a hypnotic baritone, slow and rhythmic, seductive and gentle. “Allow your attention to rest on your breath: The in-breath, the out-breath, and the spaces in between.” We feel our lungs fill and release. As we focus on the smallest details of our respiration, other thoughts—of work, of family, of money—begin to recede, leaving us alone with the rise and fall of our chests. For thousands of years, these techniques have helped put practitioners into meditative states. Today is no different. There’s a palpable silence in the room. For a moment, all is still. I take another breath.
The quiet is broken a few minutes later, when Meng, as he is known, declares the exercise over. We blink, smile at one another, and look around our makeshift zendo—a long, fluorescent-lit presentation room on Google’s corporate campus in Silicon Valley. Meng and most of his pupils are Google employees, and this meditation class is part of an internal course called Search Inside Yourself. It’s designed to teach people to manage their emotions, ideally making them better workers in the process. “Calm the mind,” Meng says, getting us ready for the next exercise: a meditation on failure and success.
More than a thousand Googlers have been through Search Inside Yourself training. Another 400 or so are on the waiting list and take classes like Neural Self-Hacking and Managing Your Energy in the meantime. Then there is the company’s bimonthly series of “mindful lunches,” conducted in complete silence except for the ringing of prayer bells, which began after the Zen monk Thich Nhat Hanh visited in 2011. The search giant even recently built a labyrinth for walking meditations.
It’s not just Google that’s embracing Eastern traditions. Across the Valley, quiet contemplation is seen as the new caffeine, the fuel that allegedly unlocks productivity and creative bursts. Classes in meditation and mindfulness—paying close, nonjudgmental attention—have become staples at many of the region’s most prominent companies. There’s a Search Inside Yourself Leadership Institute now teaching the Google meditation method to whoever wants it. The cofounders of Twitter and Facebook have made contemplative practices key features of their new enterprises, holding regular in-office meditation sessions and arranging for work routines that maximize mindfulness. Some 1,700 people showed up at a Wisdom 2.0 conference held in San Francisco this winter, with top executives from LinkedIn, Cisco, and Ford featured among the headliners.
These companies are doing more than simply seizing on Buddhist practices. Entrepreneurs and engineers are taking millennia-old traditions and reshaping them to fit the Valley’s goal-oriented, data-driven, largely atheistic culture. Forget past lives; never mind nirvana. The technology community of Northern California wants return on its investment in meditation. “All the woo-woo mystical stuff, that’s really retrograde,” says Kenneth Folk, an influential meditation teacher in San Francisco. “This is about training the brain and stirring up the chemical soup inside.”
It can be tempting to dismiss the interest in these ancient practices as just another neo-spiritual fad from a part of the country that’s cycled through one New Age after another. But it’s worth noting that the prophets of this new gospel are in the tech companies that already underpin so much of our lives. And these firms are awfully good at turning niche ideas into things that hundreds of millions crave.
MANY OF THE PEOPLE who shaped the personal computer industry and the Internet were once members of the hippie counterculture. So an interest in Eastern faiths is all but hardwired into the modern tech world. Steve Jobs spent months searching for gurus in India and was married by a Zen priest. Before he became an American Buddhist pioneer, Jack Kornfield ran one of the first mainframes at Harvard Business School.
But in today’s Silicon Valley, there’s little patience for what many are happy to dismiss as “hippie bullshit.” Meditation here isn’t an opportunity to reflect upon the impermanence of existence but a tool to better oneself and improve productivity. That’s how Bill Duane, a pompadoured onetime engineer with a tattoo of a bikini-clad woman on his forearm, frames Neural Self-Hacking, an introductory meditation class he designed for Google. “Out in the world, a lot of this stuff is pitched to people in yoga pants,” he says. “But I wanted to speak to my people. I wanted to speak to me. I wanted to speak to the grumpy engineer who may be an atheist, who may be a rationalist.”
Duane’s pitch starts with neuroscience and evolutionary biology. “We’re basically the descendants of nervous monkeys,” he says, the kind with hair-trigger fight-or-flight responses. In the modern workplace, these hyperactive reflexes are now a detriment, turning minor squabbles into the emotional equivalents of kill-or-be-killed showdowns. In such situations, the amygdala—the region of the brain believed to be responsible for processing fear—can override the rest of the mind’s ability to think logically. We become slaves to our monkey minds.

“All that woo-woo mystical stuff is so retrograde. This is training the brain.” 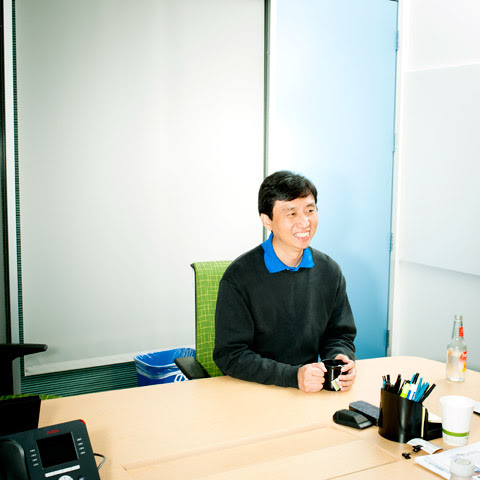